Pacific Northwest Salmon on a Stick

Gifts of the Earth Salmon on a Stick is a fantastic preparation method for slow-roasting salmon on Iron Wood sticks over wood coals.  The preparation is at least several centuries old and is part of a rich tribal heritage for the Pacific Northwest’s Coast Salish First Peoples who regard salmon and nature with reverence.  In our restaurant, a tribal member hand-carves these traditional sticks for us to use.  He finds the Ocean Spray plant, says a prayer of thanksgiving before harvesting what he needs, then carves the sticks.  Tribal cultures show thanksgiving not only for the meal itself, but also for the earth which provided the sticks.

The beauty of the trees, the softness of the air,
the fragrance of the grass speaks to me.

The strength of the fire, the taste of salmon, the trail of the sun,
and the life that never goes away, they speak to me
And my heart soars.

In an excerpt from article called, S’abadeb — The Gifts: Pacific Coast Salish Art and Artists we can see a glimpse of the Coast Salish culture:

“To Coast Salish First Peoples, the earth is the ultimate source of nourishment and knowledge. Like many cultures worldwide, the earth provides the Coast Salish gifts of food, shelter, clothing and medicine.”

“One way that the Coast Salish celebrate their respect for the earth is through First Foods Ceremonies. These ceremonies honor traditional foods — water, clams, duck, elk, salmon, sprouts, berries — and celebrate the appearance of these foods at certain times of the year. First Foods Ceremonies involve the entire community. Many people come together to harvest and prepare special foods for the ceremonies. They also sing songs to thank the earth for providing them with these important foods, year after year. One important First Foods Ceremony is the First Salmon Ceremony.” Read more…

We did a charity event for a children’s camp called Camp Korey in Carnation, WA a few years ago.  Camp Korey is specially designed for children with life-altering medical conditions, and allows them to safely enjoy the activities of traditional camp. Very cool people there.  I had the opportunity to prepare salmon on a stick for about 300 people outside on a beautiful summer day!  A gentleman named Tal spent the entire day tutoring me (thanks Tal!!) on how to pull this off in an outdoor setting since I had only prepared it in the kitchen.  The camp built us a 10′ by 20′ fire pit and filled it with river sand.  Tribal members donated the use of their sticks for the event (no small generosity… these sticks are highly cherished and passed down from one generation to the next).

This was an exciting, exhilarating experience not only because it benefited such an awesome camp for kids (the event raised $850,000 for Camp Korey and the kids!), but also because I had the opportunity to prepare salmon in the traditional manner used for generations by tribal peoples.  In the kitchen we need to get the salmon on the stick done in about 20 minutes in order to meet the demand of customers wanting a restaurant meal.  But here, we truly prepared it the traditional way which meant that the fish (fresh wild king salmon) took about 1 1/2 to 2 hours to slowly roast!  We rotated the sticks, moving them closer or farther from the fire as needed, flipping them upside down to promote even cooking, and turning them so that both the skin side and the flesh side were kissed by the fire.  The natural white fat of the belly meat (which most of us white folk cut off and toss) became like a savory candy when slowly roasted this long!  Awesome!!! 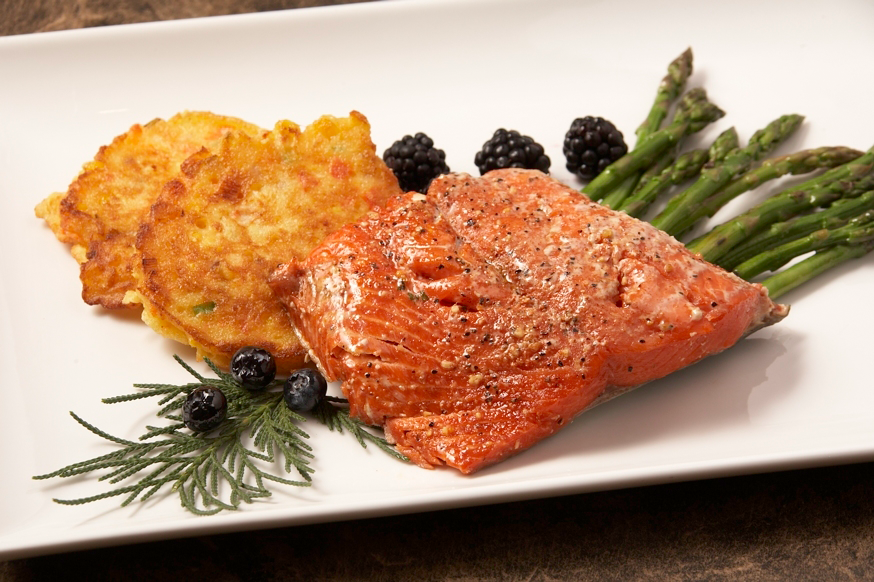 OK, so on to the actual recipe!  We serve Heritage Sockeye Salmon on a Stick with fresh corn fritters and grilled asparagus.  There is some dispute about the preferred seasoning to use on the salmon.  Purists say use only clean ocean water to season the fish before roasting.  Some say use only salt & pepper, and others prefer Johnny’s Seasoning Salt.  I use my own recipe which is sort of (distantly) related to Johnny’s.

As for the Iron Wood sticks themselves… very hard to come by.  You can inherit them (tribal members pass them down from one generation to the next), be gifted them, or make them yourself.  I know of no place where they can be purchased.  I’m still hoping for my own set for home some day!

You can prepare this around a fire pit, preferably with a layer of sand for the sticks.  Or better, on the beach with freshly landed salmon!