How to improve communication, team morale, and speed of service between the FOH & BOH in your restaurant 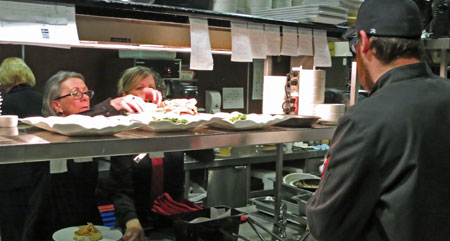 Communication between the FOH and BOH (front of house and back of house) in a professional kitchen is a constant ebb & flow of playful camaraderie, pointed comments, and terse words spoken under duress. A solid establishment with a professional crew will treat each other with respect (even in the midst of the coarse teasing which is common in our industry) and will always focus on getting quality food to the guest in as timely a fashion as possible…even if during the rush it is taking longer than normal. Here are some thoughts on how to improve cook – server communication and interaction.

Every kitchen operation has experienced this scenario. Server: “How long for my food on table 21? It’s taking you way too long.” Typical Cook reply, “It’s working. It’ll be ready when it’s in the window.” The server feels ignored, and has not been given the info they need to manage their guests. And the cook feels insulted (“…you’re taking too long.”) And, as much as I hate to admit it, many cooks in the industry believe that it is their god given right to harass and impede the waitstaff. Many believe that it is “funny” or “playful” to give the servers a hard time by not answering such a simple question, “How long on…?”

I’m here to tell you (cooks & chefs) that it is not funny. It is not appropriate, it is not professional. And most importantly, it does not serve the best interests of your guests, your business, or your team morale. And the same comment applies to servers who think that the best way to motivate the kitchen is to push, insult, belittle, or harass them until you get what you want.

Showing mutual respect and trying to understand the needs/pain/duress that your “other half” (server or cook) is experiencing will help to find common ground. We all want the same thing…a successful service providing food we’re all proud of with as little pain as possible. Improving BOH and FOH communication will simply make everyone’s life less stressful while making the restaurant more successful.

Servers have the impossible job of trying to make everyone happy, regardless of the situation. They are tasked with the responsibility of not only meeting every guest’s normal expectations, but of also being able to move the incorrigible asshole from being an indignant prick/bitch to becoming a raving fan.

Servers have learned the art of being professional soothsayers even when their minds are screaming “There’s the door…get the f__k out!” Servers have the skill to handle guest’s inappropriate abuse/stupidity in a professional manner.  Most cooks on the other hand would quickly introduce an asshole guest to their fist, or to a torrent of foul language, resulting in their subsequent termination!

What Servers Need to Understand

Make it short and sweet
Servers need to understand that in the middle of the push it is not time to point fingers or have a long conversation with the cooks about how something went wrong, or how it should have been done. The cooks don’t have time for a long explanation about why you need something on the fly or whose fault it is. All the extra talk only annoys a cook…they’re buried, they’re trying to focus, and you are interrupting their work process. Be short and to the point, but as polite as possible. 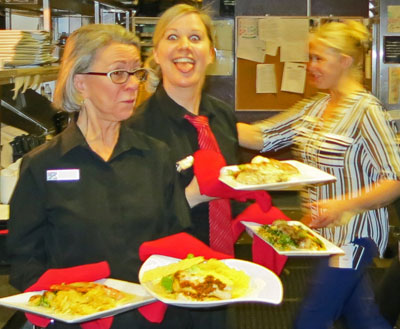 If you ask the cooks a question and they bark an answer back which appropriately answers your question but isn’t in a nice tone…let it go! They’re busy. They don’t have time for “please”, “thank-you very much”, “can I hold the door for you”, etc. Their short, curt answers are the result of being in the weeds and needing to focus. They’re (usually) not really mad at you, you haven’t done anything wrong, they’re really not even yelling at you. Their tone of voice sounds intense because they are intensely focused, trying to slam out the plethora of plates they have working while keeping track of all the ones they still have to get started. They say that the average person can remember 6 – 7 items at a time. It’s not uncommon for a cook in any station to be working 12 – 20 dishes at any given time, all in various stages of production (just starting new dishes, remembering the 5 in the oven which are all on different cook times, and plating the ones which are going to the window now.) Forgetting any one of those items for even just 1 minute can result in a f__ked up dish which needs to be started over, which derails the whole table for 15 – 20 minutes.

In the middle of a push the cooks want to interact with outside distractions for as short a time as possible so they can get back to digging out of the hole. Short, succinct communication is best. It is distractions that will really piss them off. Tell them what they need to know in as short a sentence as possible and let them get back to work. If you have an expeditor and/or wheelman then always work through that person.

Cooks: don’t spoil this by asking a hundred questions about what happened! Just get the order done the way the guest needs it and move on.

Cooks are under immense pressure to produce tons of quality food, to slam it out as fast as possible, and to make sure that it is genuinely quality food which hits the window…not dog food slung out of Billy Bob’s Choke & Puke just to sling shit out of the kitchen. The pressure to work fast and maintain perfection is severe. When it gets busy, the temptation to simply sling shit to clear the board is perpetual. But a kitchen with pride will always make the guest wait in order to serve the best possible meal, rather than simply slam food into the window in an effort to get to get it out as fast as possible.

What Cooks Need to Understand

As important as quality food is to the kitchen, quality service is equally important to a great server. If a server is asking “how long on such & such table” it indicates that they are a good server. They care about the guest, the food, and the service. The cook’s job is to make the food. The server’s job is to keep the guest happy…regardless of everything else!

If their table isn’t ready when they arrive even though they made reservations 6 months ago for their special anniversary… it’s the server’s responsibility to make the guest happy. If they didn’t get the special table or the exact time that they wanted…it is the server’s responsibility to keep them happy. If the kitchen is buried and the food is taking too long because the FOH sat too many f__king people all at once… it is the server’s job to keep them happy. If their significant other just cheated on them, they lost $10K in the casino, their favorite cat/dog just died, and they just got fired…you guessed it, the server gets the pleasure of dealing with that guest and trying to keep/make them happy.

It’s also very important to note that it is in a server’s job description to be polite in the face of adversity and stupidity. They are required to restrain themselves, be professional and polite regardless of the rude and impolite treatment they receive from guests. Since they have learned this skill is it so hard to figure out that they would expect a similar level of tolerance and professionalism from the kitchen? If they can respond professionally to an arrogant asshole guest, shouldn’t they be able to expect some small measure of professional response from the cooks when they have a legitimate request relating to their food or customer service? The FOH & BOH are opposite sides of the same coin. We need each other to make us whole (corny, I know!) So let’s all play nice together in the sandbox.

If a server questions the quality or appearance of a dish…swallow your pride and take an honest look! Seriously, they see the same dish plated by all the other cooks who work that station…it is possible that you made a mistake, or could have done better. Don’t put your pride, or your need to clear the board, in front of serving quality food. If we improve the level of communication between cooks and servers then the whole operation will improve, and so will the quality of life in the BOH & FOH. Better communication directly equates to more efficiency, less stress, faster service, and an overall better place to work. Cooks & servers are opposite sides of the same “successful service” coin. There are times when we hate each other…but we also need each other. Learning to play nicely in the sandbox together only makes our lives, our jobs, easier and less stressful.

Mutual respect and giving each other “space” in the heat of the rush are the traits of a highly successful, highly professional team. And if you say something which you should not have said (we all do that at some point), have the courage and maturity to follow-up with the insulted/offended person later…make amends. And by all means, DO NOT just push someone’s buttons for fun unless they are having fun too. If you push someone’s buttons with the intent of making them angry, embarrassed, frustrated or demoralized then you are a pathetic f__king person. Grow the fuck up and learn to be kind. It’s more difficult to do…but so much more rewarding.