Culture of the Kitchen

The Culture of the Kitchen: the Changing Leadership Style of Today’s Chef Today I came across a series of excellent articles on the culture of the kitchen and the slowly evolving leadership style of today’s professional chefs. They discussed the evolving leadership styles of today’s chefs as we move away from the old-school stereotypical “Hell’s Kitchen” style chef who lead people by belittling, screaming, and verbally abusing them. The articles were written by a variety of respected chefs including René Redzepi (Noma), Wylie Dufresne (WD-50, Alder ), Iliana Regan (Elizabeth, Bunny the Micro Bakery, and Wunder Pop), David Chang (Momofuku), and Suzanne Goin (Lucques, A.O.C., Tavern, and – with her husband, David Lentz – The Hungry Cat).

Here are a few of my favorite excerpts from those articles:

Illiana Regan: “As chefs we are teachers and if we are ridiculing our students, who we haven’t properly taught, we are at fault. But if we taught them and gave them the proper tools and opportunities to excel in a positive way and they continue not to learn or improve over time, then the situation has to be properly addressed.”

“This is usually the point when I let them go. They are not part of the team. I don’t like to repeat myself, and since I’m not a chef who yells, I give my employees a few chances. If they continue not to listen or learn, then it’s not me, it’s them…Their desire to succeed has to come from within them – not from my yelling or cursing at them.”

Wylie Dufresne: “When it comes to managing a kitchen, I like to think of the myth of Sisyphus. There are people who like pushing that rock up that hill the hard way. There are people who are helped along by coaching, who will get that rock higher up the hill when someone’s yelling Go! Go! Go! And there are people you can’t yell at, because it doesn’t work. A great chef will have ten cooks and figure out that each one of them has to be spoken to differently—that it will take ten different approaches to help them get the rock up the hill.”

René Redzepi: “I’m not talking about cutting out discipline or the pirate ship-like camaraderie of the kitchen. The kitchen needs discipline, codes of conduct, a clear chain of command. Cooks need to feel like they’re part of a group that’s pushing together. A restaurant needs organization and quality control. And when people feel more confident, people cook better. They make good decisions in critical moments, and that is what cooking is.”

“I want things to change for the sake of this profession. When we started trying to change the culture at Noma, we did it for the sake of our own happiness. I didn’t expect that it would also make us a better restaurant. But it did. This has worked for us. I genuinely do see the improvement in the staff’s morale, in our guests’ satisfaction, in the quality of our creativity and execution.”

Suzanne Goin: “For me, work was always really intense, but also really fun…That joking and silliness, raunchy humor, etc., has always been a part of kitchen culture. It’s sort of how we all release from the intensity of working on the line and the pressure of getting the food out night after night.”

David Chang: “As my years in the profession stack up, I find myself caring less about cutting-edge cooking and more about the well-being of my employees and how my customers feel. It’s something Jeremy Fox spoke out in the profile Rachel Khong wrote for Lucky Peach. For Jeremy, leaving his high-profile position at Ubuntu—where he was burning through everything around him—to cook simpler food, even if it meant that people wouldn’t care as much about it, was okay with him. Necessary for him.”

Time for a Change

For many different reasons/motivations today’s chefs need to develop a leadership style which still preserves the historic discipline of the professional kitchen while at the same time respects basic human dignity and is therefore less demeaning.

I remember one of my early mentors Chef Louis. He frequently would stand toe to toe with the Saucier on a busy night and scream at him, “Where the hell did you learn to cook you asshole? The fucking kindergarten school of cooking?!” At other times he would launch his clog across the kitchen to hit someone he was angry at in the shin. Then, while hopping on one foot, he would yell at them, “Give me back my fucking shoe you asshole.”

I respect Chef Louis a lot, and I learned many things from him. I consider him one of my early mentors. But I certainly don’t want to emulate his leadership style…only his culinary talents.

Another encounter with Chef Louis was less abusive and much more instructive. It has left a permanent positive impression upon me. He had asked me to set-up a small plate-up for 20 people in the prep area kitchen. All the food was already prepared, I simply had to get it on the table and let Chef know when it was ready. I did so. He came back with other cooks to start the service. “David, where are the plates?” “Sorry Chef, I didn’t know I had to get them.” I ran and grabbed hot plates. “David, where are the fucking utensils?! How do you expect us to serve this?!” “It wasn’t on the list Chef.” I ran and grabbed them. “Wipe those plates…where in the fucking hell are the damp plate wipes!”

After service he called me into his office and without screaming at me Chef Louis sternly explained to me that he expects his staff to think for themselves. I should have thought of everything which he could possibly need in order to execute the service he asked me to prepare for. It was not his job to think for us.

“Mise en place is more than just the food…it is everything needed to execute the service.”
– Chef Louis Chabot

To this day, that has been one of the most defining experiences of my culinary career. “Mise en place is more than just the food…”

Although the old school method of beating people into submission may have worked in the past, and may still work for some chefs, in today’s society it won’t work for most…nor should it. Quality staff do not need to be motivated by fear and intimidation. It only demoralizes them. The culture of the kitchen is changing and today’s Millennial generation of cooks will work for a “screamer” just long enough to glean everything they can learn and then get the hell out.

Today’s Chef needs to communicate clearly, firmly, and sternly as needed. The standards which we expect must be high, they must be taught, they must be consistently adhered to, and they must be firmly enforced. But we must couple stern discipline with an honest respect for the personhood of those who we are speaking to. Rather than saying, “Do it right you prick or get the fuck out!” Now we say something like “This is what I expect. You will choose to do it this way or you will be choosing to leave.”

What’s the difference? The first comment is demeaning and tyrannical. The second still demands the same standard but puts the ball in the team member’s court. They have a choice to make…to do it correctly or leave. To step up, or get out. As a Chef I can respect the person but disapprove of their work or their attitude. In the end it is not so much about what you say, but how you say it. It is about your tone, your intention, your ability to communicate clearly. Do you mean to educate and hold the standard, or do you mean to insult, intimidate, or demean your crew? Your words do not matter as much as your intent does. 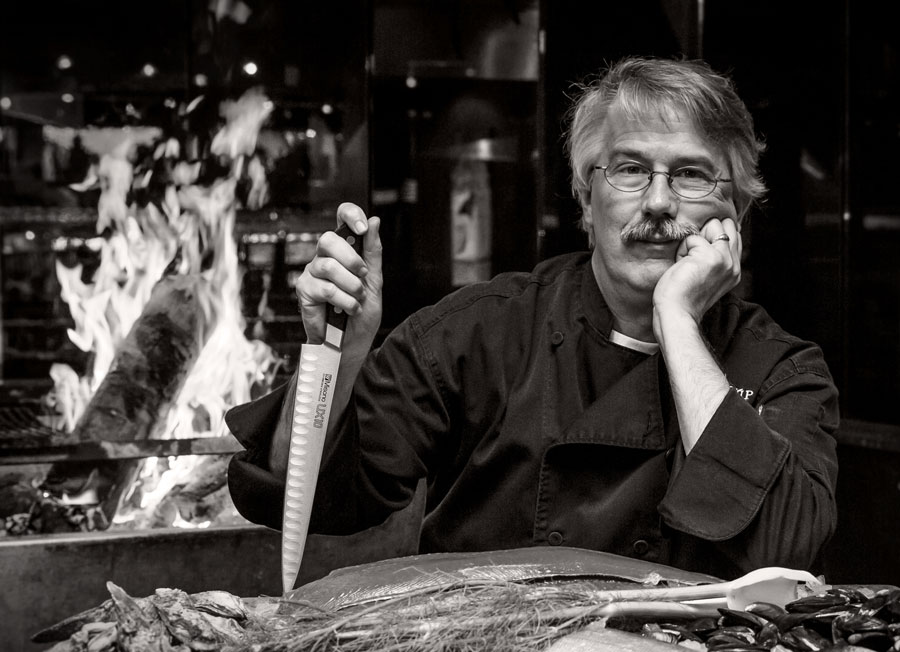 I’m at a place with my crew where I can say, “Who put that dog shit in the window? Fix it.” And the responsible cook will feel chagrined but not maligned. They knew better, tried to cheat, got caught, and now regret it. It’s my way of combining the potty-mouthed sailor camaraderie of the kitchen with a need to demand adherence to the standard. It’s not PC, not HR correct, but it’s also not humiliating…not screaming.

The vision in my mind which I try to emulate is that of an iron fist in a velvet glove. I want my staff to feel that I care about them, that I respect them, that I’ll bend over backwards to accommodate special requested days off if at all possible. But they also know that the standards need to be met, they better not cheat on the food or service…they better not piss me off because there will be appropriate consequences. At least, that’s what I hope they think…it’s the goal I’m moving towards.

What do you think? Have you worked with an “old school chef”? Is it time for a change? Will cooks work towards perfection if no one is there to yell at them?

Nice article….actually agreed with all this specially with the writings from Wylie, Rene and Suzanne…lil bit of the yelling is necessary and clear chain of command is important but kitchen shouldnt be led by fear.

Totally agree nugraha teguh ginting We need discipline and a chain of command in the kitchen, but it needs to be done w/ respect not fear.

Great article! yes I’ve experienced those “old school” Chefs and while their methods are questionable the results cannot be argued, (at least as far as I’m concerned, I’m a knucklehead), I agree that the “attitude” needs change, (and it is changing), but discipline is extremely important, I like your analogy of “an iron fist in a velvet glove”. Like you say David support is very important and while those old school Chef’s methods were questionable they were also always there to give you the shirt off their backs if needed. I appreciate David Chang’s perspective as well as Wylie Defresne’s,… Read more »