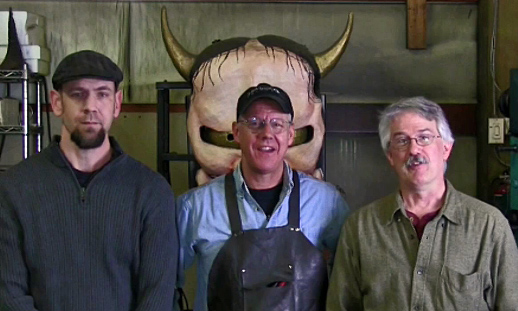 Joe Bartlett aka The Knife Nerd reached out to world renown knife maker Bob Kramer to see if we could interview and video him and his work…and Bob said, “Sure, come on down!” I was stunned that a guy with such notoriety would agree to be interviewed by 2 local joes (no pun intended Joe!) So we got to spend time in his shop, watching how he folds steel, and gaining some insights into his craft.

If you don’t know who Bob Kramer is, here is a brief bio
Bob Kramer is one of only 117 certified Master Bladesmiths in the world, and I believe he is the only one who specializes in creating only culinary knives (most of them focus on hunting/fighting knives & swords). He is particularly suited for creating knives for chefs because he spent time working in kitchens (including the Seattle Four Seasons) before he forged his way into knife making. He has been interviewed by Anthony Bourdain for the Raw Craft video series. And his knives are recognized as among the best in the world. He has designed high quality signature series knives for both Zwilling J.A. Henckels and Shun knives.

He also designs custom knives such as the one pictured. But, his custom knives are in such high demand that the only way to get them is through an auction. And it will cost you roughly $400 to $500 per inch. The people who have been lucky enough to get one openly rave about the beauty and high quality of their knife…a testament to his masterful craftsmanship. He also occasionally auctions off very special custom knives… the most recent one sold for $32,000 at auction!

With this kind of reputation you can understand our excitement at the opportunity to meet the man in person.

So, what is Bob Kramer like? He is very passionate about his craft. That came through over and over again during our conversation. He is also very focused…he moves with purpose. And despite his fame, he’s a down-to-earth, humble, just plain cool guy.

The Knife Nerd asks some good questions during the Bob Kramer interview, getting feedback about Bob’s background, how to cook salmon with a meteorite, the proper balance of a knife, and more.

Behind the Scenes with Bob Kramer in the Shop – Video 2

This is the second part of the Bob Kramer interview. Here he shows us his 2,400° coal smithing furnace, his welding skills, and the 12,000 lb hammer he uses to fold the steel. We also had some interesting blade-smithing conversation with him regarding the composition of metal and the purpose of folding steel (he has made a knife with 10,000 layers folded into it!)

Fantastic news for those of you who want to learn the craft of blade making…Bob Kramer let us know that he is planning on opening a bladesmithing school, hopefully sometime in 2017. Stay tuned…when Bob is ready to publicize his classes I’ll post links to his info here.